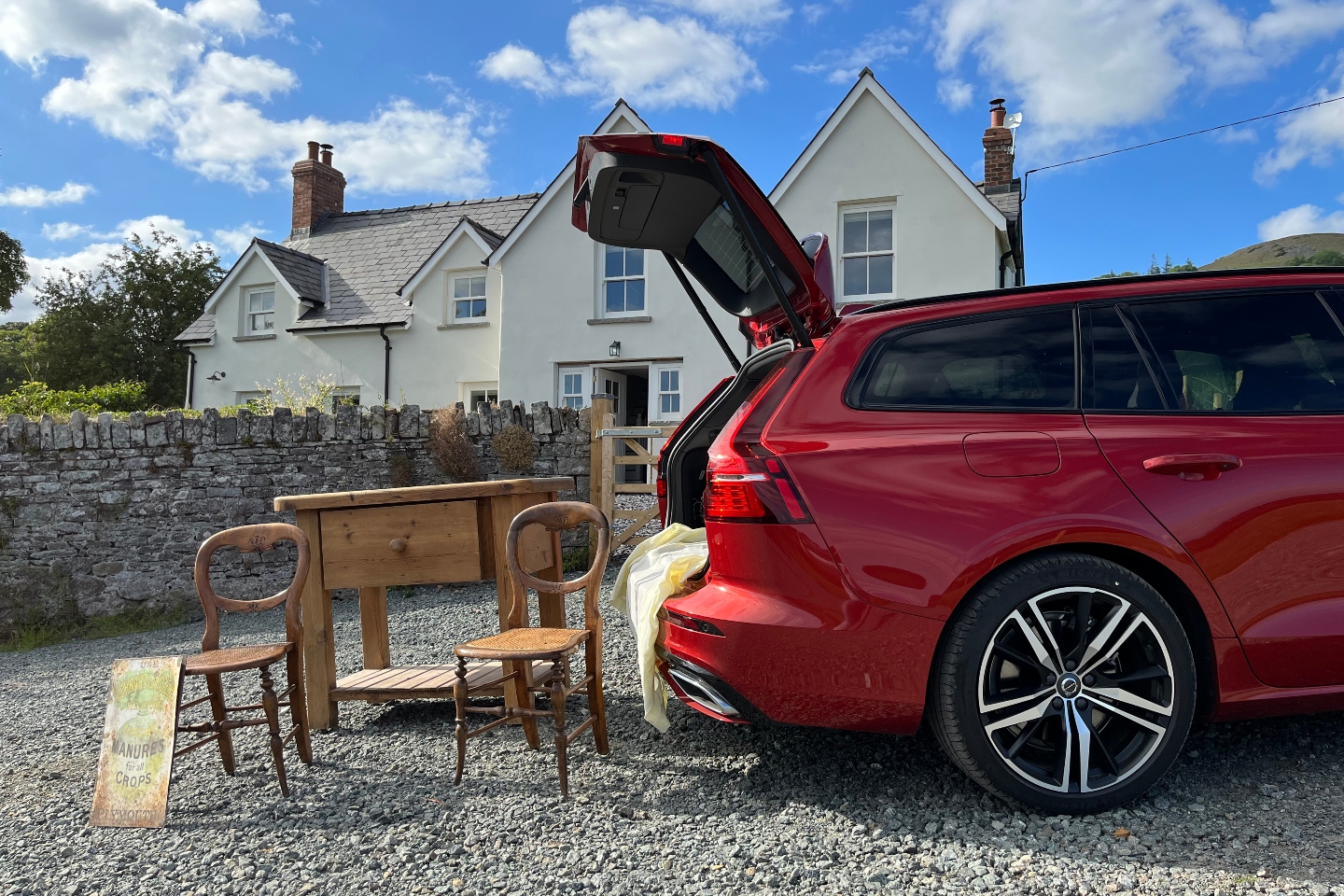 Enthusiasts mock hybrids. They say that having two power sources is stupid, and you should commit to either petrol or electric but not a mishmash of both. Well, I disagree. No I don’t, I disagree strongly, actually. Electric cars don’t fit my lifestyle right now and petrols cost a fortune to run these days. But I’ve found that a bit of both works brilliantly, and that’s a very pleasant surprise. The early hybrids I drove were, I agree, largely pointless. You were hampered by extra weight, brakes that often felt like an on-off switch and, when you opened the boot, half of it was missing. And all that for, at best, about 10 or 15 miles of real-world electric range. Rubbish.

But what we have here is the updated Volvo V60 T6 Recharge, and it isn’t rubbish. Not at all, it’s really very good. Why? Well, it has a bigger battery – up from 11.6kWh to 18.8kWh – and officially does nearly 55 miles on battery power. It doesn’t do that reality, of course, but it does do 41 miles – I know it does because that’s what I got out of it. Quite easily as it happens, with a chunk of town driving and an even bigger chunk of motorway miles. I’ve no doubt that it would do even more miles with a bit less of the battery-zapping latter.

Now, 40-odd miles is a good amount. It’s not far off the average UK daily commute, so if you can charge it cheaply at both ends that’s easily your journey to and from work covered off by electrons, which is going to save you a bundle at the pumps. I wasn’t using the V60 to get to work, though, I was using it to go to Wales. As I’ve mentioned a few times, I am doing up a farmhouse there, so I make the trip a lot. I’ve tried it in an EV6, and it was a faff because (at the moment) I haven’t installed a charging point. This means I need to charge en route to give me enough juice to get around when I arrive. This makes the journey time longer, and, because I often don’t leave until after work on a Friday night, I end up arriving very late. That puts me in a bad mood – and, if the Chippenham 350kW Ionity chargers are offline or the car isn’t an EV6 but an ID.4, which charges at 125kW, my mood is even worse. It was no hassle at all in the V60, though. It works brilliantly as a long-distance car with no range anxiety. No stress at all, really.

What about the shorter, day-to-day stuff? Yep, it does that brilliantly, too. In Wales, I was trundling about all over the shop picking up odds and sods and, because everything is spread out, I was covering a good 20 to 30 miles most days. That was no beef at all, though, and was all done on electric power alone. Really, the engine didn’t fire once in a week. I just plugged the V60 into the mains overnight, with the three-pin plug, and the battery was topped up and ready to go again the next day. I even had a result in a local car park, which was completely full other than the electric bays. So I plugged in for an hour or so, got a few extra miles of range, and was charged the same (£1.50) fee I’d have been charged just to park normally. Result. In practice, then, I went from London to Wales and back again (350 miles), plus over 200 miles of driving in between, on less than one tank of petrol. Not bad, that. And it averaged 50mpg, which would’ve been nearer 60mpg if I hadn’t forgotten to charge it up before I left for home and been a little less lead-footed everywhere I went. 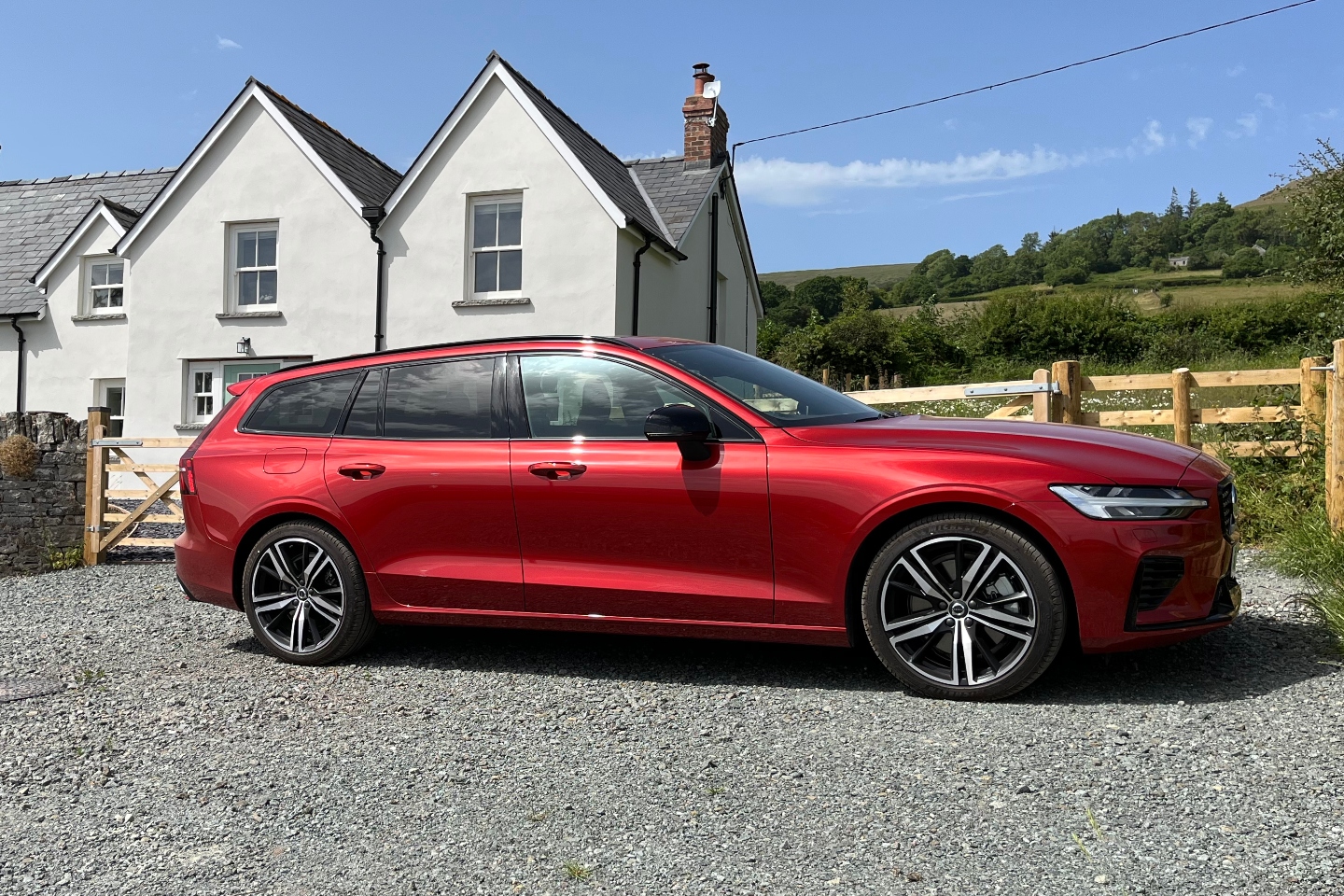 Is it a good estate car? Hell yes. I’m trying to avoid any Lovejoy ‘jokes’ here, but it’s hard because I could’ve been shooting the remake. On my way from north London to the M4, I did a little detour to Walton-on-Thames, to pick up a largish butcher’s block I’d bought on eBay. I also had a couple of old chairs in the back, which I’d bought a while ago, plus all sorts of other stuff like lampshades and a few pictures. That’s on top of a week’s worth of luggage and a bunch of tools. In other words, a lot. Would that have fitted in other premium PHEV estates? No, because the V60’s boot is unaffected by batteries, so, just like the non-electric versions, you get 519 litres with the seats up. That’s way more than the compromised boot in the Mercedes C300e Estate and BMW 330e Touring. Actually, it’s even bigger than the E350de.

Is the V60 a nice car to drive? Well, I think so. It’s not sporty, even though the car I had was an R-Design. I couldn’t care less about that, though. When I am doing big trips I want something comfortable, quiet and easy to get along with. The V60 is all three. Dynamically it isn’t bad: the steering is just fine and it handles gamely enough, with good grip and decent all-wheel-drive dependability to get up a muddy farm lane. But the brakes work like normal brakes, so even though there’s regen involved, you can stop smoothly all day, every day.

The ride isn’t perfect, I will admit – but that’s something you pick up on only if the road is really broken. Even then its not crashy, like the equivalent Mercedes, and miles better all round than a Tesla Model 3. The V60’s suspension is mostly supple and very well-balanced front to rear, so it doesn’t kick your head off the headrest of bumps – your sleeping passengers will really appreciate this, and so will you because they won’t wake up grumpy. In fact, it’s a fantastically comfortable motorway car and quiet, too – again, not something you can say about a Model 3 – and, when you add in the most supportive seats in the business, a spot-on driving position and genuinely superb build quality, the V60 became my happy place to wile away a few hours. The fact is that a lot of electric cars, while good EVs with lots of clever onboard tech, fail to be this good at the regular car stuff.

The V60’s engine didn’t upset the atmosphere either. Well, most of the time it wasn’t running, but when it was it’s pretty much silent unless you hoof it. Then it whirrs away smoothly in the background, although there’s no need to boot it often because it’s ridiculously grunty. At low revs you need only nibble the ‘throttle’ to whizz along effortlessly, and it’ll tow 2,000kg, which isn’t bad for a hybrid estate – and 200kg more than the C300e will pull. It’s quick outright, too. This new T6 has only 10hp on the old version, because Volvo has limited its combined output to 350hp, but a much bigger chunk of that now comes from the electric motor. It’s up to 145hp, so it’ll ping you from 0-62mph in 5.4 seconds, which, I can tell you, feels like plenty in a family estate. 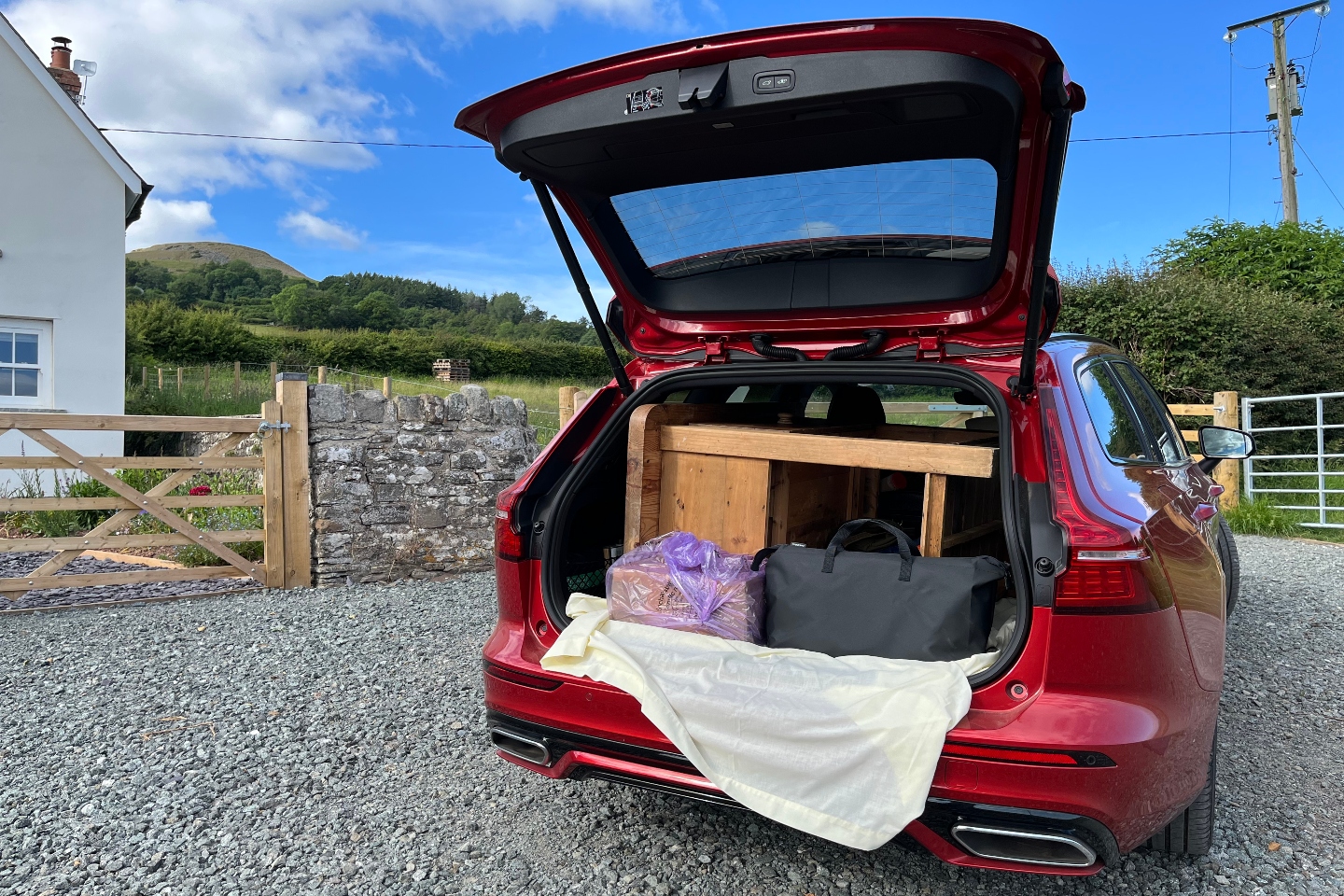 I’ve already mentioned the boot space, which is great, but there’s loads of passenger space as well. At six-three, I am not short, but I had all the head and legroom I needed in the front and, in the name of good testing, I remembered to sit in the back, behind my driving position. I fitted. Easily, even with the front seat miles back and an optional panoramic roof fitted. On the flip side, it doesn’t feel massive on the road, which is one of the reasons I’d have a V60 over a chunky SUV, or the larger V90 for that matter.

I genuinely think that, for me – I am not claiming this is a one-size-fits-all policy – this is my perfect everyday car. You know how sometimes things just fit? Well, the V60 is one of those things. It fitted my life like hot wax poured into a mould – right down to the smallest details. Some very specific details, I grant you, but I’ll mention them anyway, just in case they twig with to you, too. Firstly, there are a couple of gates on the farm’s lane, and it really bugs me when I get out a car to open them and the ignition switches off. Audis do this, among others, and it means I am consistently getting out, then switching the car back on again two second later. Then again two seconds after that, when I get out again to close the gate behind me. Here’s the thing, cars: as long as I’ve put you in park, JUST LEAVE ME TO MAKE THE DECISIONS. I’m the sentient being in this relationship (well, supposedly), so why is a bloody machine thinking it knows best? The V60 doesn’t do this. It’s like an obedient dog that does as it’s told, and that makes me calmer.

I also like the way I can use the folding mirrors when I want – see, I told you I was being specific. Anyway, BMWs don’t, and here’s why that annoys me. When I am coming up to a width restriction, I have to pretty much stop in a BMW before I’m allowed to operate this function. Why? And why do they have to fold back out when I do more than a few miles per hour? Sometimes, if I’m going down a tight country lane, I like to fold the mirrors in, just in case someone comes hurtling around the corner and causes me to lose £500 of glass, motors and plastic. But I can’t in a BMW, because, again, it’s thinking for me. The Volvo lets me be, so I can sail through width restrictions easily and reduce the risk of unwanted repairs if I am travelling along country lanes.

If that lot makes me sound like an old fart, that’s because I am an old fart, and it’s probably why I’ve decided a Volvo hybrid is the best car on the world. Is that because Volvos are built for old farts? Well, no, because Volvo is now a cool brand, or so I hear. And they are possibly the best-looking cars on the road – I’ve included a few of the latest press shots below, so you can judge that for yourself. I really am struggling to fault this car, and that’s very rare – there’s always something. Well, there was one thing, actually. The indicator tick is erratic and not synced with the flashing green light. Honestly, that’s it. Otherwise, it’s brilliant, and everyone should have one.