Earlier this week, I hit a major milestone. After months of buying, borrowing, cutting, grinding, welding, assembling, disassembling and re-assembling, I’m excited to say that I finally have a roller. Maybe even a roller+. As I write this, Version 2.0 of my Model A roadster project is more complete than ever. It has front suspension, rear suspension, an engine, transmission, torque tube, rearend, wheels, tires and more.

Building a hot rod is filled with milestone moments. Every project is different, but I’ll never forget the day I found the frame, brought home the body, picked up the engine and took delivery of the quickchange rearend. On a traditional hot rod, sourcing the right parts can be a full-time treasure hunt. Even if it takes ages, I’m always happy to add another colorful chapter to my car’s story.

Starting with an original 1932 Ford frame from Bob Stewart Jr., my friend David di Falco and I welded in a So-Cal front crossmember, cleaned up the original K-member and installed a Model A rear crossmember. We fabricated custom motor mounts out of heavy U-channel, and I had them sandblasted by Luke Johnson. To help with front spring clearance, I notched and boxed triangular pockets in the rails. Using what I learned in City College welding class, I filled no less than 41 holes in the frame.

Up front, I brought down the nose with a ’32 Ford heavy axle dropped four inches by Jack Fuller. It’s located by an original ’32 Ford wishbone and suspended by a reverse-eye spring with ’32 Ford perches. David and I dropped the ’40 Ford round-back spindles the old-fashioned way, and we narrowed an F-1 tie rod to handle steering chores. The brakes are 1940 Ford items (but I’m currently looking for usable front drums).

For the powerplant, I have a 1948 Ford 59A-B flathead from Garry Odbert. There’s a bunch of vintage speed equipment in the wings, but that’s a story for another day. It’s linked to a rebuilt ’39 Ford transmission (double detent top to come) and a custom torque tube that David and I made out of ’35 and ’40 Ford components.

Then there’s the rear. I spent months agonizing over what approach to take, and in the end, I went with a Rodsville V8 quickchange built by Ben Thomas of Rancho Deluxe. Every time I look at it, I can’t believe I have it on my car. What more can I say? Ben’s the man. The rear is equipped with a 3.78 ring and pinion, ’40 Ford axle bells and wishbones shortened by Donny Welch.

Although it may sound like it, this isn’t supposed to be a full-fledged car feature. These are just the Cliff Notes. There’s more to this story—much more, including the tale of that old filled Deuce grille shell and those homebuilt lakes headers.

I’ll end with this. My roadster is a new car built out of mostly old parts. It’s not perfect and it’s not supposed to be. We’re doing everything we can to build it using the same tools and techniques as the early hot rodders. We’ve covered a lot of ground thus far, and I’m looking forward to seeing what’s next.

There are plenty of threads about rollers already, but I figured I’d add mine to the mix. It’s not everyday that you get your car on all four wheels and sitting right for the first time—ever. 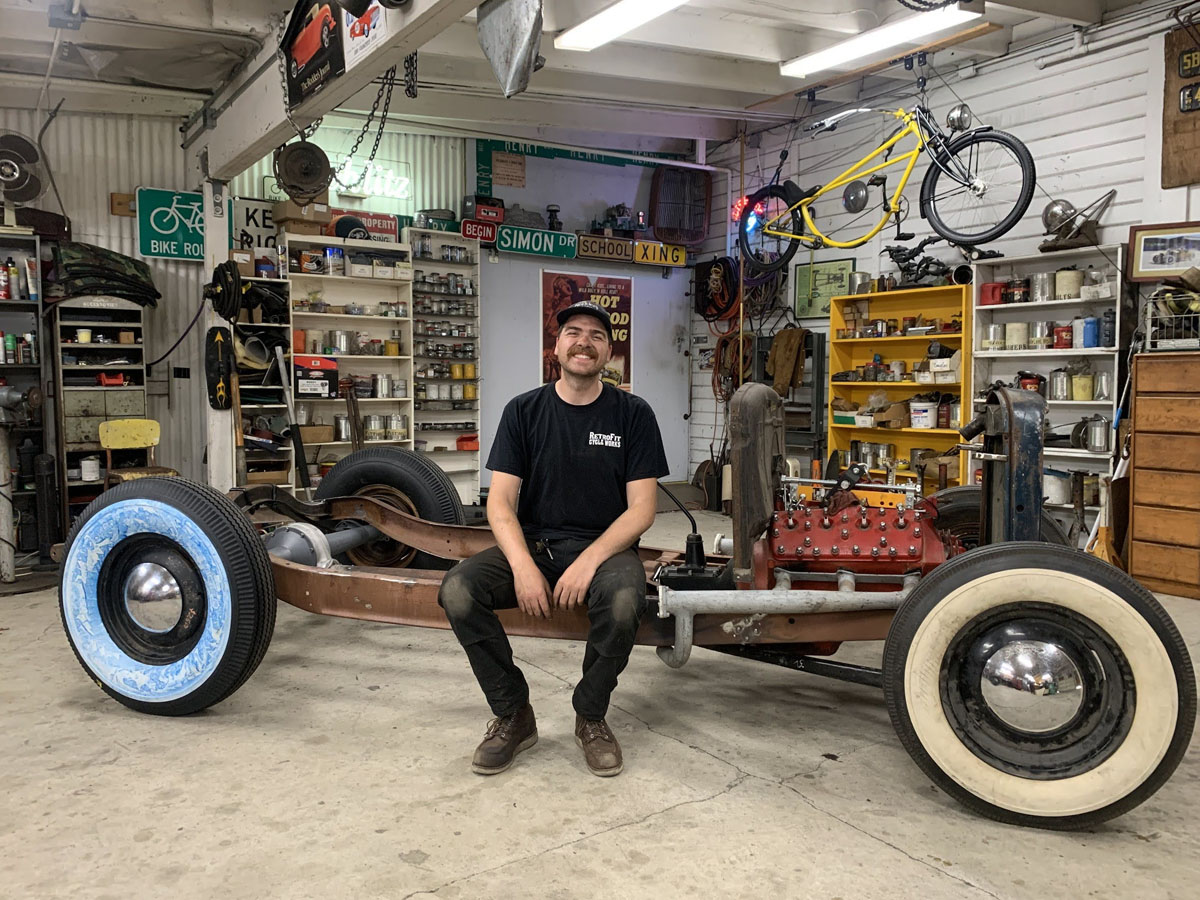